The check engine light suddenly came on in the Civic a few months ago. The engine was running fine, but the light stayed on. I used my little Autel OBDII scanner to scan the codes: P1336, P1337.

Both codes have the same possible causes:

Both codes have the same possible symptoms:

The engine has not been stalling or lacking power. I have seen no difference in performance at all. As I read more, I found that this sensor detects problems, but it doesn’t affect how the engine runs. I was confident that the problem was with the sensor, not the engine, so I ignored it up until now. It failed safety inspection so my quest for a solution began.

This video was the first thing that came up, and happened to be very useful.

It is in Spanish, but the visuals should be helpful. The guy starts out talking about the code, and showing the possible cause on the screen of his code scanner. The note he pays attention to is this:

“Techs in field report that wire harness rubbing against alternator belt may be the cause of DTC. Fix wire harness & insert back in track on upper timing belt cover.”

He then goes on to show how the smaller of the wiring harnesses is too close to the alternator belt. Between 4:08 and 4:11, if you know what to look for, you can see the belt is cutting into the segmented harness shield. It is difficult to see, and he keeps trying to give a better view. Around 5:08 the car is running and it’s easier to see the ragged edge where the belt is cutting into the harness like a saw. The harness is jiggling and if you follow it to the left where it touches the belt, you will see the problem.

He then shows the same problem from underneath the car. If you had a hard time seeing what was going on before, this should make it clearer. The cable shield has been chewed into, and the wires are clearly damaged.

The root cause of the harness coming in contact with the belt is that the harness has come out of the track that secures it, or someone took it out for service and forgot to put it back in. The track is a long slot along the edge of the timing belt cover, and the harness snaps into it.

The video was helpful to show the problem, and I went out to check my car. Sure enough, I saw the exact same thing. 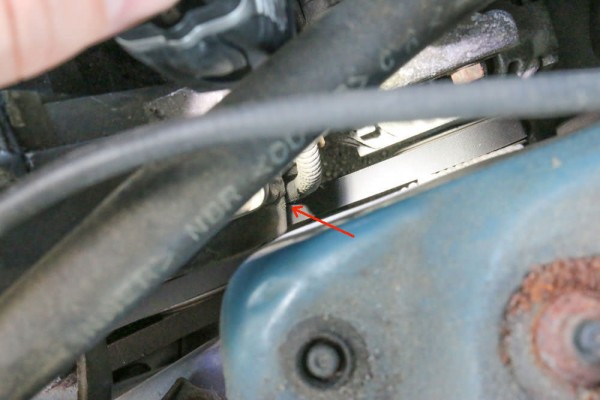 View from above. The arrow points to the place where the belt and harness are making contact. 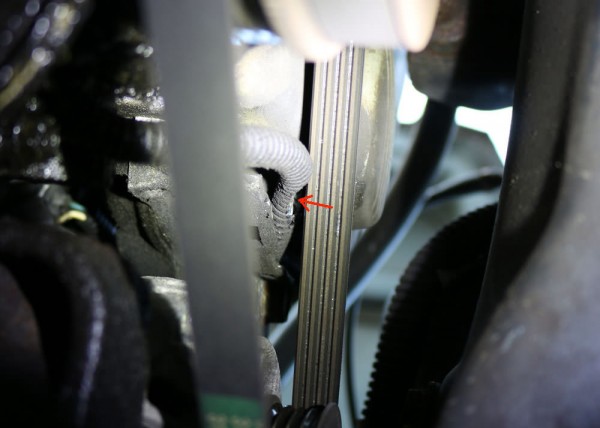 View from underneath the car. The belt has cut into the wiring harness 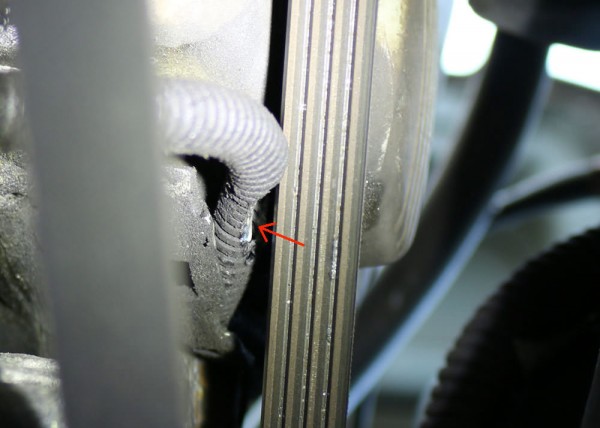 View from underneath the car. Closeup of the damage to the wiring harness

Understanding the problem, and fixing it, are two different things, as I was about to find out.

The tricky part: getting the connector unplugged

I spent about 3 hours trying to get the plug for the wiring harness disconnected. There were several factors:

Getting the connector free was a crucial part of the process that I could not find fully explained anywhere. I found a page with some good photos and info, but not enough information to tell me why the front part of the connector wouldn’t budge, even though I had managed to get the two halves to start coming apart. I suspected that something was holding it in place, but I couldn’t see what it was. 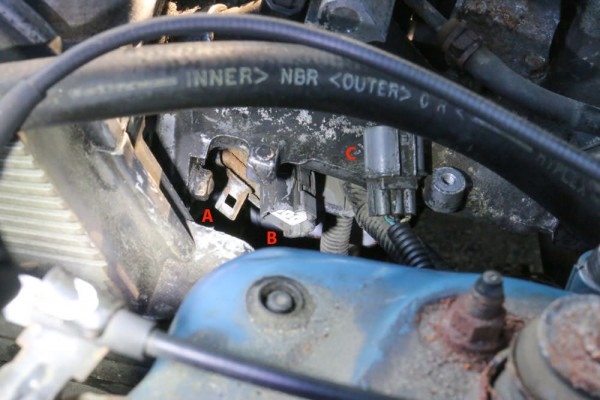 “A” is a metal tab that connector “C” slides onto. “B” is the other half of the connector

It really helped me to find an example of a connector that worked in a similar way. Luckily, there is a gray plug to the right of the dipstick that you can experiment on. I practiced taking it off the metal tab and putting it back on in order to get an idea of how to do it in the cramped space.

The connector near the dipstick may help you understand that needs to be done to get the other one apart. They aren’t necessarily identical, but they are very similar.

I found that I was able to get more room for my hands by temporarily removing a couple of brackets. One is held in place with a 10mm bolt and the other with a 10mm nut. The brackets can be slid out of the way, but remember to put them back!

Once I got the connector apart, the rest of the procedure was much easier, although it still took some doing.

Here are the steps I took to solve the problem:

When I saw how much of a pain this procedure was, I decided to document the procedure for anyone who might be in my same situation. I hope you find it helpful.

UPDATE 09/14: After almost a month the check engine light is still off, and I was able to pass inspection.

catjuggling.com is a participant in the Amazon Services LLC Associates Program, an affiliate advertising program designed to provide a means for sites to earn advertising fees by advertising and linking to Amazon.com